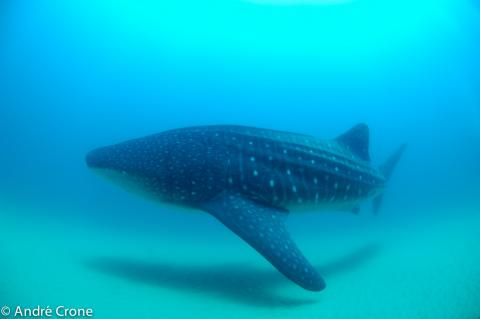 As part of our tour with the “Mozambique Experience”, we had the opportunity to spend time with the two marine biologists who are studying the Whale Sharks and the Manta Rays in the area. Andrea Marshal, originally from the USA, has been studying the Mantas here for more than three years. Simon Pierce, from New Zealand arrived in October of last year to study the Whale Sharks. Their research is being coordinated with the University of Queensland in Australia and is being supported in part by Casa Barry Lodge, Tofo Scuba and the recently formed Mozambique Manta Ray and Whale Shark Trust.

Simon’s research has so far indicated that the Whale Shark population in Tofo is migratory, with most individuals not appearing to stay in the area for more than a couple of weeks. “What we are seeing here is mostly juvenile and young adult Whale Sharks, with most being between six and nine meters in length. The majority up to now has been immature males, but we will see what happens during the rest of the year.” With the enormous amount of plankton in this area, it appears that the Whale Sharks approach the coast south of Tofo specifically to feed. During our trip, we were able to witness an uncommon occurrence in Tofo, when something in the plankton was drawing both the Mantas and the Whale Sharks in to feed together.

Andrea Marshal’s Mozambique Manta Research program was set up more than three years ago, and what she has so far learned about the Mantas in the area is extraordinary. One of things that we had noticed almost immediately, other than the fact that these Mantas appeared to be bigger than Mantas we had seen in other parts of the world, was that most of them appeared to have large bite marks on them. What Andrea’s research has clearly indicated is that the Manta population in this region is the only one in the word where a significant majority of the individuals have one or many shark bite wounds, some old and scarred and some being very fresh.

These wounds, according to Andrea, are probably a contributing factor to these Mantas spending a great deal more time being cleaned than Mantas that have been studied elsewhere. With tags and listening stations, Andrea has been able to document behavior, with some individuals spending hours each day being cleaned. “Cleaning is extremely important to the health of a Manta Ray”, says Andrea, “What we see here is multiple individuals, up to 10 or 15 at times, cleaning together, taking turns on station in a very orderly and social manner”.