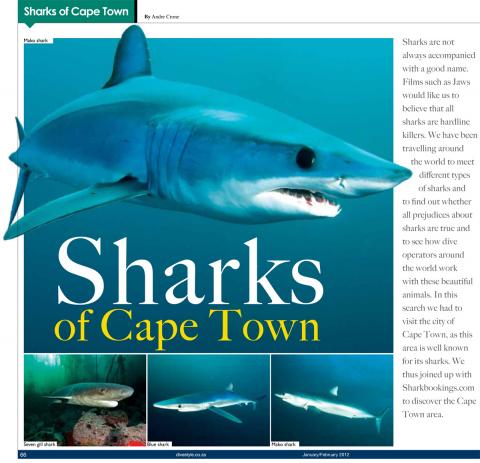 I am currently running running a story about the Sharks of Cape town in the South African diving magazine DiveStyle. I love South Africa and I do love Cape Town. Our latest trip to South Africa brought us to various places including Cape Town. This is really a town that I can recommend. The city is great. The Table Mountain is great. The diving is more than great. Imagine a place where you can easily find Seven Gill Sharks, Mako's, Blue Sharks and Great White Sharks just to name a few. We visited Cape Town together with our twin girls who were only 18 months at that time. Traveling with kids in not always easy, but in Cape Town we had no problems at all. Well, except for one. We had a Baboon in our rental car, they are very capable of opening the doors themselves. It will take some time before my daughters will love Apes!

The story that my wife wrote and is accompanied by my images is all about these sharks that live around Cape Town. I must admit, I was a but unfortunate with the Great Whites Sharks. The visibility was too low for some good shots. But I was very fortunate with the other shark species. I was on a Blue and Mako dive which brings you to the open waters south of Cape Town. It didn't take long before we had several Blue Sharks and an occasional Mako around our bait. We visited the Seven Gills on the way back to Cape Town. Imagine what a day that was with so many different species of unusual sharks.

The Seven Gill Sharks were definitely my favorite in Cape Town. The dive brings you to a site covered with Kelp. The scene looks like you are diving at the time that Dinosaurs were still around. The ancient Seven Gill Sharks look very friendly and they are very abundant at the dive site. They are very hard to miss, there are so many of them and they come from every direction.

The story in DiveStyle magazine also holds my first black and white image that I ever published. It is an HDR image that I took from the Table Mountain. For now I can only wait for our similar story about the sharks of South Africa, that will feature a lot more species, that we will run in Duikmagazine here in the Netherlands in the near future.